The Power of Love In Saint John of the Cross

by Sister Helena of Mary, O.Carm.

The Carmelite Order celebrates the feast of Saint John of the Cross on December 14th. Saint John is first of my favorite male Saints, with St. Francis De Sales, as my second. Humanly speaking, his life was a story of poverty and sufferings but spiritually, it was a story of love between a creature and the Creator.

Juan de Yepes was born June 24, 1542 in Fontiveros, Spain. He had two brothers, Francisco and Luis. Luis died as a small child after his father’s death. His father Gonzalo De Yepes belonged to a noble family of silk merchants. His mother Catalina Alvarez was an orphan girl who was raised by a local family and earned her living as a weaver. The two met when Gonzalo was on a business trip. Gonzalo fell in love with this attractive young woman and the two married “out of love” without the blessing of the Yepes family. Gonzalo was disinherited and the couple raised their family in hard work and financial straits but full of love and dedication. When Gonzalo died, Catalina was left to care for the boys. Life proved to be very difficult for her and the small family of three lived in abject poverty. Catalina assumed the heavy responsibility of feeding and raising her children. She was forced to move from place to place to look for a good paying job that would help her to meet even the bare necessities of life. This childhood experience of self-sacrificing love will form John and he would develop this subject and used it as a structure in his explanation of the Divine love of God and the standard of what our own response to God’s love should be. His sayings of: “Where there is no love, put love and you will find love,” “Love is repaid by love alone,” “In the evening of life you will be examined in love,” “When you experience something unpleasant, look at Jesus Crucified and be silent,” are all sentiments formed by his own experience of self-emptying love.

Catalina was described as a devout Christian who brought up her sons “with the greatest Christian spirit, and encouraged them to be devoted to the Mother of God.” Years later, Saint John would recount a story of his childhood. He had fallen into a pond and a very beautiful woman appeared and stretched out her hand to him in the motion of helping him. Young Juan refused to extend his hand to her because he did not want to get her dirty. A worker with a pole eventually fished him out of the pond and rescued him. Saint John often said that it was for this reason that he was very devoted and fond of Our Lady.

We cannot speak of Saint John without mentioning Saint Teresa of Avila. The two met when St. John went back to Medina del Campo to celebrate his First Mass after ordination. He had entered the Carmelites but felt unhappy thinking he was called to a more austere life of the Carthusians. St. Teresa had founded a reformed Carmelite community of nuns in the same town and was beginning a process of finding men to join her reform for the friars. This was to be a providential meeting. They met and talked and St. John confided to her his plans. St. Teresa for her part convinced John to join her reform and assured him that whatever he was looking for with the Carthusians, he would find in the Reformed Carmel. John agreed provided that he did not have to wait long.

John and Teresa suffered much for the reform of Carmel. It resulted in St. John being held prisoner for 9 months in a Toledo cell by his fellow Carmelite brothers. True to the practice of the times, he received the beatings and penalty imposed on a “renegade” religious. He was in a solitary confinement, deprived of any kind of mental or physical activity, in the cold and dark prison cell with very small window to allow for a little bit of light to enter. When the time ordained by God came, he escaped, and made his way to a monastery of Reformed Carmelite Nuns in Toledo. They barely recognized him for they found him emaciated, confused and looking barely alive.

St. John’s experience in imprisonment brought with it a purification of the purest quality. It would bring out the sparkle already in the diamond that was St. John. It produced the most beautiful poetry Spain ever had- the Spiritual Canticle. John of the Cross-would serve the Discalced Order in a spiritual way. He died in Ubeda on December 14, 1591 from a blood poisoning originating from a gangrenous ulcerated leg sore. Pope Clement beatified him on January 25, 1675. His canonization occurred 50 years later on December 27, 1726 by Pope Benedict XIII. He was declared a Doctor of the Universal Church by Pope Pius XI August 24, 1926.

Personally, I love Saint John because he is a true voice of Truth. He is dependable because he does not water down the demands of the Gospel. He points to what is true and necessary and speaks plainly without any attempt to soften the blow. He challenges, but at the same time, he comforts with words of love and understanding. Â He demands, but at the same time, understands the frailty of human nature. Â He holds up an ideal but makes room for human weakness. He feeds us with the solid meat of the spiritual. He is austere but at the same time poetic and eloquent. He speaks of mortification and detachment but always in the context of loving. He reminds us that we are special and loved by God. He reminds us that we have been bought by the blood and death of Jesus and that nothing – no suffering, no trial, no persecution- can ever make us repay what He did out of love. Except to love Him back.

Saint John wrote his major works of The Dark Night, Ascent of Mount Carmel, Spiritual Canticle and Living Flame of Love. He also wrote some prose, prayers and Counsels. We have some surviving letters he wrote.

Saint John of the Cross is known as the Doctor of the Dark Night. That is an inaccurate description. His dark night was only a means to the greater end of transforming union in love. He is a Doctor of Love as the late Father Kieran Kavanaugh, OCD would entitle one of his books. Only if we see him in this light, will we cease to be afraid of him and his doctrine.

Why do I speak of St. John in the 21st century? How is he relevant? I believe first and foremost that he, like John the Baptist”, is the voice that cries out in the wilderness, “make straight the way of the Lord!”  His voice bears the impact of conscience.  Our lives can become filled with so many imagined needs, unquenched longings, inordinate attachments, selfish ambitions and plans.  We find our plates full, and yet, still go away hungry and thirsty.  We find ourselves in a world of options and freedoms, and yet, find ourselves enslaved and limited.  We find ourselves soaring so high in our spiritual search for meaning, and suddenly, find ourselves on a rapid descent and a fatal crash on the ground of life’s reality.  What does John of the Cross say to all these?  “On the way to the mountain, nothing, nothing, nothing. And at the top of the mountain, still nothing.”  (Ascent of Mount Carmel).  God is much greater than all the goods of this earth.  Much greater than the loftiest of our spiritual experiences.  Much greater than our mind can conceive.  He teaches us that the ascent to union with God is accomplished in darkness and nakedness.  He teaches that God is not found AFTER the darkness passes, but that God is IN the darkness, and to embrace this darkness is the surest way to find God.  Faith, Hope and Love, the three things that last.  In the end, these are the surest guides we can depend on. We are living in these times of faith-crisis.  We look for signs and miracles.  We exalt grand spiritual experiences and gravitate to what our intellect can understand and our senses can grasp.  We are confronted by worldly idols and created some ourselves.  We put out our hands and frantically grab whatever makes us happy, only to be disappointed, because our strongly cherished idols make us feel empty.  In short, we look for God in all the wrong places.  St. John invites us to journey WITHIN. 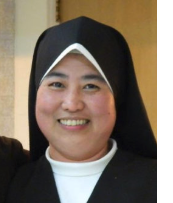 Sister Helena is a member of the Carmelite Sisters for the Aged and Infirm, a congregation founded by Venerable Mary Angeline Teresa, whose ministry is caring for the aged and infirm in homelike setting. She entered Carmel in 1997 and professed perpetual vows in 2007. She lives at Saint Teresa’s Motherhouse in Germantown, New York.

Sister Helena is a registered nurse by profession and has worked in that capacity in the congregation’s local facilities in Pennsylvania, Illinois, Bayside NY and Ireland up until 2010 when she was transferred to the Motherhouse to assume the responsibilities of Assistant-Prioress. In December 2015, she left for Chicago to attend the Institute of Religious Formation at Catholic Theological Union in preparation for her role as novice director.
Sister Helena has served the community in varied capacities at the Motherhouse as nurse manager, Director of Human Resources and current Web Master. In December 2015 she began her new role of Novice Director. She is a member of the congregation’s various committees: Vocation Steering Committee, Carmelite Heritage Committee and The Cause and Charism Commission of Venerable Mary Angeline Teresa.