Walking through a Holy Door is more than just crossing a threshold; it is a chance to pray and reflect on our personal experience of the Extraordinary Jubilee of Mercy, says Sister Joanne of the Carmelite Monastery in Nedlands.

The Monasteryâ€™s chapel is one of eight locations in the Archdiocese of Perth to open a Holy Door as a destination for pilgrimage during the Holy Year.

Sr Joanne, who has been at the Monastery for half a century, said it was an exciting time because there had never been a Holy Door at the chapel in her memory. 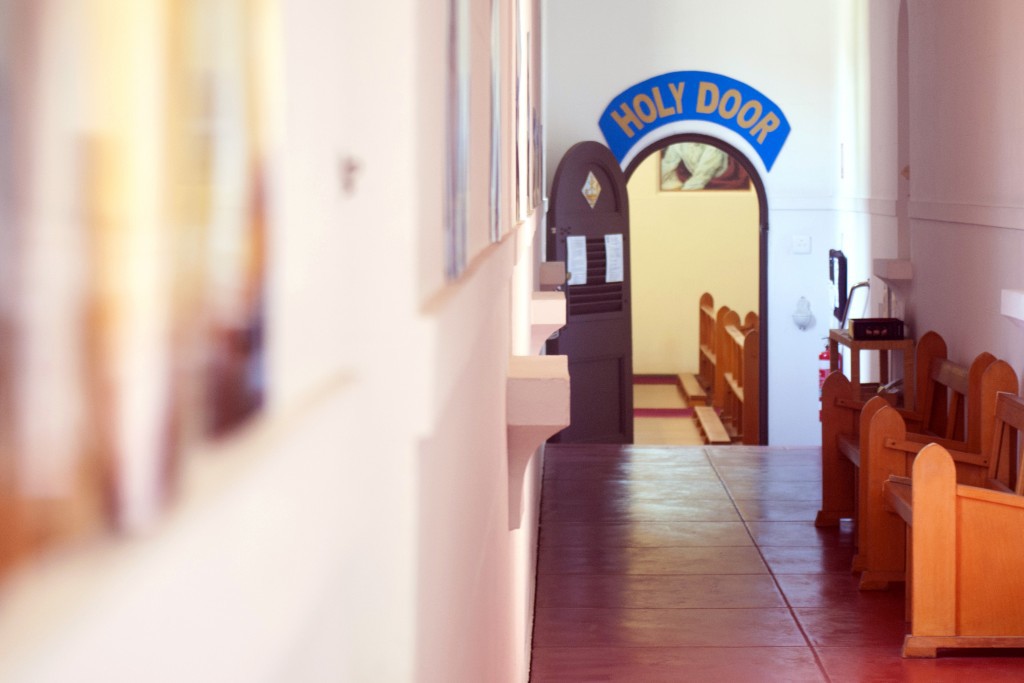 The passage leading to the Holy Door at the Carmelite Monasteryâ€™s chapel in Nedlands has been adorned with mercy-themed images and quotations, in order to enrich the experience of pilgrims. Photo: Rachel Curry

â€œWe really didnâ€™t expect anything. It was only a couple of weeks before (the Holy Door) was opened in the Cathedral that we were offered the opportunity to have a Holy Door in our chapel,â€ she said.

â€œWe were happy to do that; it was quite a privilege.â€

The 14 nuns at the Monastery live in an enclosed community, enabling them to lead a quiet life of prayer and contemplation. However, the Holy Door and chapel are open to anyone who would like to make the pilgrimage.

Sr Joanne said the front door of the chapel was considered for use as a Holy Door, but exposure to the elements made it unsuitable, since the door must remain permanently open for the duration of the Holy Year.

Instead, the Sisters at the Monastery settled on using the side door to the chapel, adorning the adjoining passage with mercy-themed images and quotations, in the hope of enriching the experience of pilgrims wishing to pass under its arches.

â€œThe pilgrimage is meant to be a time of prayer and reflection, not a happy wandering,â€ she said.

â€œIf people come across the passage prayerfully and quietly, to get the feeling of not just going through a door, but a Holy Door, I think it will have worked out quite well.â€

The Holy Door was blessed and opened by Parish Priest Father Joseph Sobb SJ on 20 December last year, during a Mass with the Carmelite community.

Recalling her experience of walking through the Holy Door that day, Sr Joanne said the act couldnâ€™t be separated from her reflections on the Year of Mercy.

â€œBasically, itâ€™s more than just crossing a threshold; itâ€™s the whole experience of the Mercy Year and that was sort of a solemn beginning,â€ she said.

â€œItâ€™s very much tied up (with the theme of mercy) for me. Thatâ€™s what it means to me â€“ that people come to understand Godâ€™s mercy, especially those who need it most, and then pass it on to others.â€

Walking through a Holy Door is one of the conditions required to receive a plenary indulgence during the Holy Year.

Sr Joanne encouraged people to read Pope Francisâ€™ Bull of Indiction on the Extraordinary Jubilee of Mercy, which the Monastery has made available for the community to purchase at a token price.

She said the Holy Fatherâ€™s writing on indulgences was particularly interesting and made the concept easier to understand for modern Catholics.

â€œI donâ€™t think the modern person can understand or accept this idea of having three hundred days taken off your purgatory. How can you think of purgatory as time if thereâ€™s no time in eternity,â€ she said.

â€œBut I think it makes sense what the Pope said â€“ that, when we sin, Godâ€™s forgiveness is complete and total, but our sin has had an impact on us. Itâ€™s left a wound, so to speak. So, the indulgence is the indulgence of the Father reaching out to heal all the wounds.â€

As part of the Year of Mercy, the Monastery will hold a public Mass on 1 October 2016 to celebrate the feast day of St Therese, a Discalced Carmelite and Doctor of the ChurchÂ  known for her writings on the merciful love of God.

Their other major celebration for the year takes place on 16 July, the feast day of Our Lady of Mount Carmel.

The Carmelite Monastery is located at 100 Adelma Road, Nedlands.

Rachel Curry started working as a journalist and photographer for the Archdiocese of Perth in January 2016. She studied Communication Studies and German at the University of Western Australia and has previously worked for West Australian Regional Newspapers.